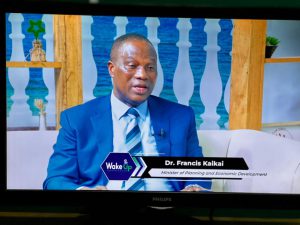 Speaking to Journalist Amadu Lamarana Bah and Phebean Swill, the Minister confirmed his satisfaction of the overall outcome of the results, stating the professionalism and leadership demonstrated by Statistics Sierra Leone throughout the process. Minister Kai-Kai was also quick to state that they were listening to the ongoing debate around the Census, adding that they are fully committed to addressing the issues around the Census starting with a full conduct of a technical audit as well as a post-enumeration period.

Minister Kai-Kai appreciated the World Bank for agreeing to support the 2021 MTPHC and other partners who invested technical and material support to the entire process, stating that even though the World Bank pulled out at some stage due to technical misunderstandings, Statistics Sierra Leone fully committed to address the technical issues and requirements raised and to continue with the Census.

“The biggest lesson the Government of Sierra Leone learnt from the exercise is that there are certain critical development processes which you cannot totally depend on others for… with the issue of the World Bank, what people see is just the pull out, but what they don’t see is the process. We are always going to be very strong partners with the World Bank, but going forward with development work you can always agree to disagree”, said Minister Kai-Kai.

He noted that Statistics Sierra Leone was setting up mechanisms for post census activities that would showcase more demographic analysis on the census information.

Minister Kai-Kai further stated that other countries that are preparing to conduct digital censuses are also seeking technical assistance from Sierra Leone citing Nigeria as an example.

Dr. Kai-Kai said the 2021 Census has provided locality data which was now available in the statistical system. He said places such as Falaba and Karene districts never had data, but the census has now even provided geo-codes for each village in Sierra Leone which was identified through a satellite imagery that was provided by the World Bank.

He said that the Census has provided the essential data pertaining to demographic, social and economic characteristics of the population and housing which will be used for planning at every level.